One of the major goals of the last decade’s scientific research has been to extend human life. A great deal of resources has been deployed in finding treatments to reduce mortality, both in terms of scientists and research funding.

There is no doubt we have witnessed unforeseen improvements in the human life-span. In 2019, life expectancy in Europe was estimated at 78.6 years while in 1950 it was only 62 years.

Along with it comes some drawbacks to be considered: the longer you live, the more chances you have of developing several chronic conditions. It is important to consider the quality of life in addition to the number of years.

What is the purpose of living longer if you are not able to “really” live anymore?

A chronic and degenerative disease that has a huge burden on people’s lives is Alzheimer’s with all its related symptoms. It is really astonishing how this condition can completely turn the world upside-down, not just for patients but also for families, friends and caregivers (you can read some of these stories here).

The scary part is that the incidence of Alzheimer’s increases with age and there is no doubt more and more people will get it in the future.

Currently, 33% of all people over 65 have been diagnosed with Alzheimer’s and, in 2050, this percentage is going to rise to 51%; mostly because of the increased life expectancy and the lack of efficient diagnosis and treatments.

If we look closer, the way Alzheimer’s is diagnosed is quite far from accurate and it is definitely not comfortable for patients. Everything starts if a person is thought to be suffering from cognitive impairment. The general practitioner will administer a cognitive test and, in case of a confirmative result, more investigations will start. The usual practice is to rule other causes first, such as stroke or memory loss and only after that, he will prescribe a specific test (usually a PET scan) to confirm the presence of the disease.

At the moment, this test is the only way to diagnose it with a fair accuracy but it is quite expensive and it is very hard for a person with Alzheimer’s to stay still for more than 40 minutes.

In addition to these disadvantages, the most crucial problem concerns diagnosis timings. When such cognitive symptoms become visible, the disease has already reached an advanced stage and it has been proved that brain damage begins at least a decade before the first symptoms appear.

The problem of diagnosis is not only related to patients’ condition but has a direct effect on research as well. In fact, it is very hard to get a large enough cohort of people to run reliable clinical trials and most people do not want to go through all the current diagnosis phases for no real reasons, especially since in case of a positive result, there is no cure.

“The lack of a way to secure accurate early detection influences drug development and vice-versa.”

The lack of an approved treatment for Alzheimer’s has several complex reasons, some of which are purely technical, some involve missing resources while others are hard to grasp for outsiders and lie inside the scientific community.

Regarding the latter category, a fascinating and scaring explanation involves the so-called “Alzheimer’s cabal”.

For many decades, the leading hypothesis has been linked to the presence of protein fragments, called beta-amyloid, which form clumps inside the brain that cause neuronal death and need to be targeted to cure the diseases. This theory is the “amyloid hypothesis”.

For too much time, every research that did not target such a hypothesis has been considered a waste of resources, journals were not willing to publish about other concurrent hypotheses, scientists were forced to radical careers shifts and fundings were almost entirely directed towards the amyloid hypothesis.

Truth to be told, although it has been defined as a cabal, the behavior of the leading scientific community has never meant to damage the research field and they truly believed that there was only one way to solve the problem. When we are truly convinced to be on the right path to discover the truth, we tend not to accept the reality for what it is.

In the end, there is a fine difference between being very perseverant and blind.

Unfortunately, such biased decisions slowed the research progress by at least 10-15 years, according to Dr. Daniel Alkon, a senior NIH neuroscientist.

The consequences of this approach did not remain inside the academic community but caused the failure of more than 20 amyloid drugs.

Let’s look at some of the most notable trials:

After all these failures in both the scientific and pharmaceutical worlds, the amyloid hypothesis is no longer considered the only reasonable explanation and several new hypotheses are being proposed (and brushed-up again) all over the world.

To mention a completely different approach, Dr. Rhoda Au has been tracking the health of people in an entire town as director of neurophysiology for the Framingham Heart Study. For more than 70 years, several scientists gathered an incredible amount of data and some of the people naturally developed Alzheimer’s.

Her hypothesis is that it is possible to predict whether a person will get the disease simply by listening to the sound of his voice or analyzing the way he writes over time.

Although this theory has not yet been confirmed and the study is only at the beginning it is important to acknowledge unconventional approaches and the people behind them.

It would take an entire book just to mention all the work that scientists and Alzheimer’s advocates are doing around the world and so many new discoveries look extremely promising.

It is now up to the scientific community to learn from previous mistakes, radically change its mindset and aim to the greatest goal there is: giving people a life worth living. 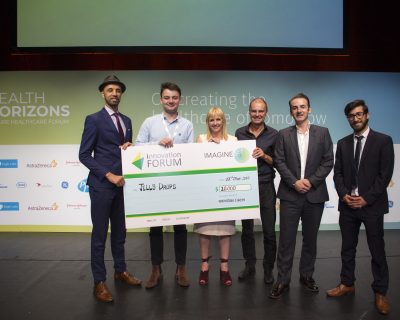 “It pays off to be honest with people” Interview with Nick Hooton, CEO of Jelly Drops

Have you ever looked at a parent or grandparent getting older and wondered how you could improve their health? If they’re living with a chronic, common condition, chances are many people around the world are asking themselves the same question on a daily basis with their own relatives in mind. Lewis Hornby asked himself thataaa

“It pays off to be honest with people” Interview with Nick Hooton, CEO of Jelly Drops