2016 was a fantastic year for the global not-for-profit: the Innovation Forum. As a grassroots network of ~150 associates we managed to hold over 40 events across the globe, run an Accelerator that attracted close to 300 applicants and a global conference that peaked this year at over 600 attendees. In this post, I’ll run over some of the 2016 achievements from my own personal viewpoint and hint at some of the big initiatives we have planned for 2017.

In September 2016, we held the third annual instalment of our flagship global conference in the historic city of Cambridge (UK). At the conference over~600 scientists, young researchers, entrepreneurs, industry professionals and investors were delighted by panels, keynotes and workshops featuring industry and political heavyweights such as: Professor Patrick Vallance (President R&D GSK), Jorg Debatin (VP & CTO GE Healthcare) and Markku Markkula (President of the European Committee of the Regions). Furthermore, the conference also contained the finals of the global accelerator and saw delegates from over 30 countries in attendance. 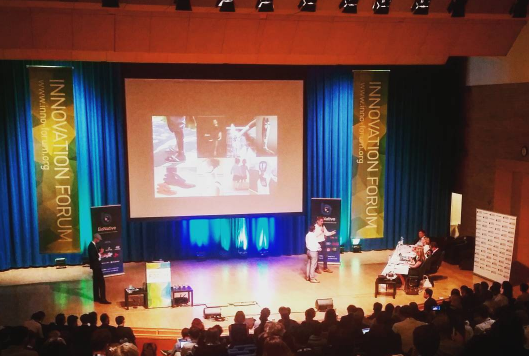 In September 2016, the Innovation Forum co-organised “Pitch at the Paras” with the fantastic team at DIT (UKTI Pre-Brexit) Brazil. At this event UK companies in accessible technology took part in a week long trade mission; which, also featured a Paralympics themed pitching event. As part of this programme, the invited companies held meetings with companies, the media and potential customers across Rio and Sau Paulo. Furthermore, the pitching event held at the UK Paralympic House featured the CEO of UKTI, British Ambassador to Brazil, HRH Prince Edward, several Brazilian celebs., senior representatives from the Brazilian and British business communities, a multitude of medal winning Paralympians and of course the fabulous selected companies. The selected companies were: Walk with Path, Give Vision, Carbon Black, Active Hands Company and Open Bionics.

The winning team as selected by our esteemed judges was Open Bionics. 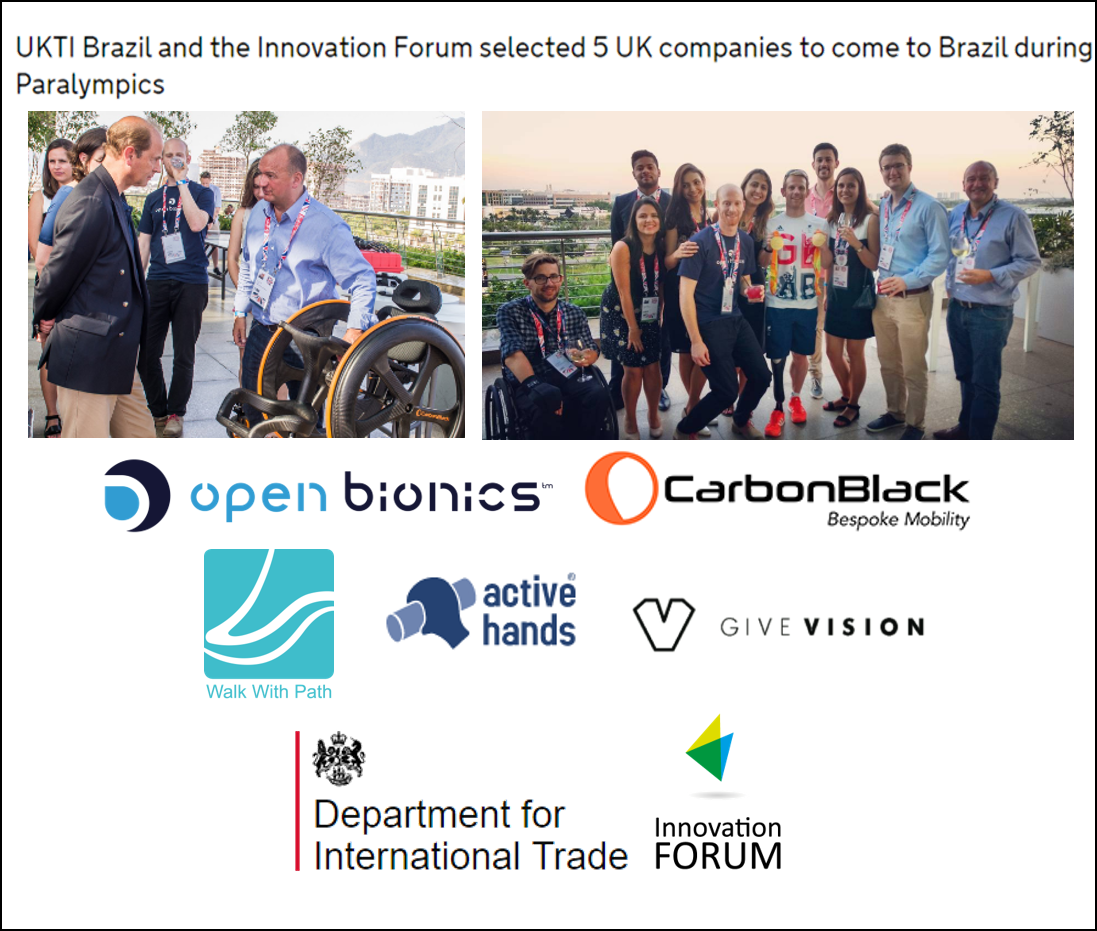 This past year we have published numerous articles on our website, both an innovator of the month and also high level interviews. My particular favourite (mainly as I did it), was this fantastic interview we did with Neil Woodford of the Woodford Investment Management on the early stage community. It’s fascinating to hear from industry leaders and to know that as an early career researcher opinions and policies are changing in favour of entrepreneurs (away from business being a dirty word in academia).

In November 2016, Innovation Forum was invited by the EBD group to participate in the organisation and judging of the “Start-up Slam” competition held as part of Bio-Europe Cologne. Working with the EBD group and Johnson & Johnson Innovation, we sourced the top entrants and then judged them in over 2 hours of rapid fire back to back pitches. The winning team, EpiAxis Therapeutics from Australia, walked away with an extensive mentorship package from the lead sponsor and organiser, Johnson & Johnson Innovation. 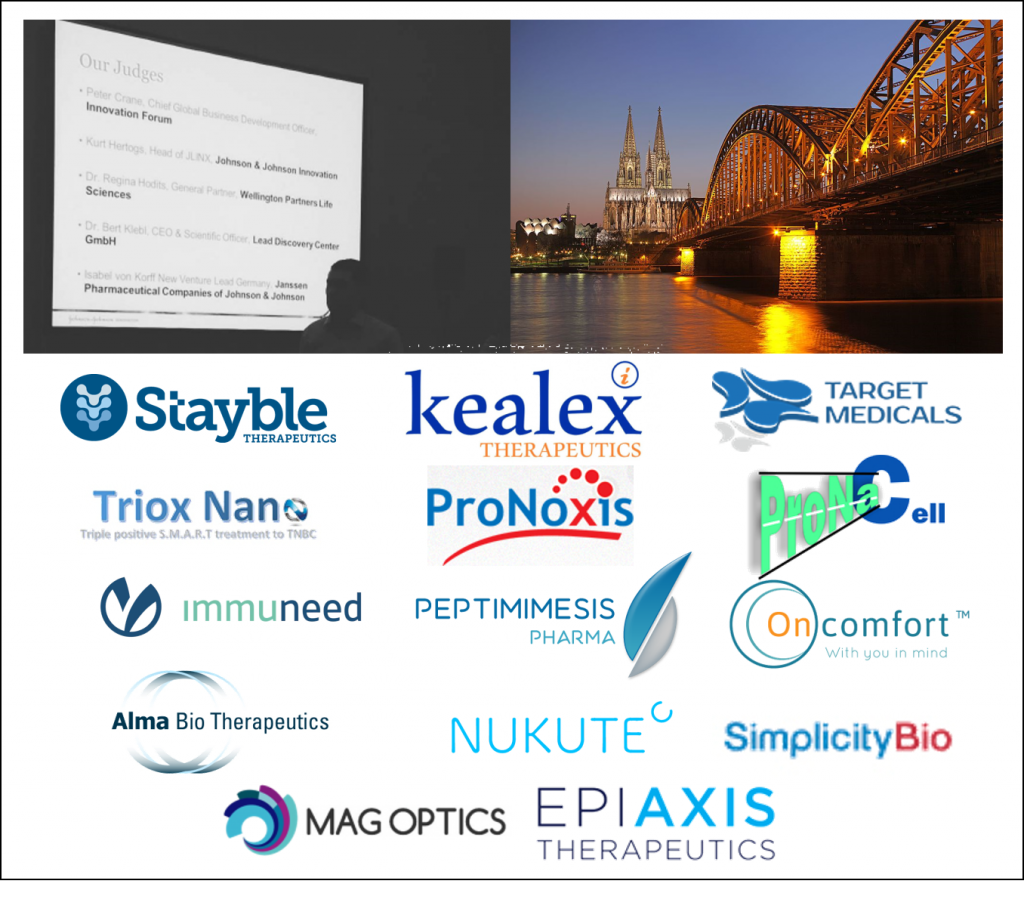 In 2016, Innovation Forum unveiled its expanded IMAGINE IF! Accelerator 2016. Unlike other business plan/accelerator competitions, this programme was open to technology from any area of Deep Science or Technology (startups that are founded on a true technological innovation or scientific discovery). We received over 300+ applicants, from across our global network and held regional (preselection) IMAGINE IF! finals in: Hong Kong, Lausanne, Munich, Oxford, Barcelona, London, Cambridge and Krakow. In total, we received applications in the following areas: 15% digital health, 13% platform tech, 12% diagnostics, 12% medical devices, 9% cleantech, 8% therapeutics and 31% other/convergent technologies. From this we selected a global top 50 and following some electronic mentorship, a top 15 to pitch at the finals.

After an exhaustive process and over 2 hours of live pitching at the global finals (held as part of the global conference 2016 in Cambridge), NG SAFE was selected as our winner. NG SAFE was presented with $30,000 USD of non-dilutive funding to help develop their idea company further.

We would like to thank our judges: Ann Connolly (Johnson & Johnson Innovation), Claire Brown (Biocity), Kieran Murphy (GE Healthcare), Antony Mattessich (Mundipharma) and Sarah Haywood (Medcity). We would also like to thank all our sponsors especially Johnson &Johnson Innovation who supported both this conference and accelerator at the global level. 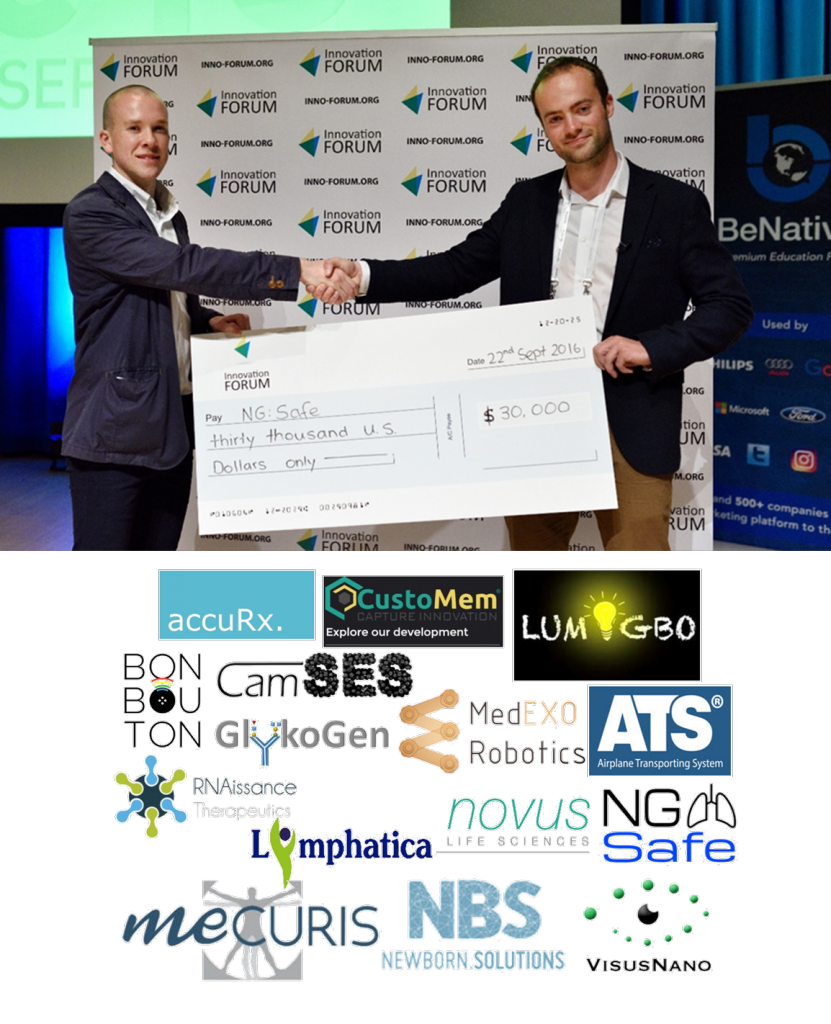 6. An increased focus on Innovation in China

As I have previously referenced in previous posts and publications, it is my personal belief that Asia (and in-particular China) is going to be the hotbed of global Innovation in the next 20-30 years. This year we have seen 5 hugely successful Innovation Forum Hong Kong events both in HK and Shenzhen, focused on this very issue “How can entrepreneurs take advantage of the opportunities in the Chinese mainland and HK”. I have been very fortunate to be at the forefront of some of these discussions and was blown away by developments during a trip to ChinaBio (in Suzhou), an invited trip on tech entrepreneurship to Beijing (with IMAGINE IF! co-coordinator Thomas Bray, see below) and on several visits to Shenzhen/HK. I was also fortunate enough to talk at an IFHK & HKVCA association event on finding funding for start-ups in HK. Innovation Forum is at the forefront of China-UK Innovation interactions and works with partners across all geographies.

7. Quality local events across our network

Having had over 40 events across our network this past year, it is incredibly difficult to single out any for particular praise as they have all been of such high quality. That said, one I attended personally (and that was on my home patch of Oxford) and that I particularly enjoyed was on Immunotherapy. At this event over 300 attendees came to hear talks from executives from Autolus, Immunocore, MedImmune, Woodford Investment Management and Oxford University. The event also succeeded in bringing together investors, practising clinicians, academics, students and industry professionals – a rare feat even in Oxford!

8. Acknowledgements to our global network of 150 associates [local teams]

At the Innovation Forum we are a true global network of passionate young researchers and entrepreneurs working to change the world through ideas. The highlights above reflect the hard work of over 150 people from our local teams running events and raising sponsorship, the conference team (Helen, Ting, Alex), the accelerator team (Tom) and also the global team (Marek, Bauke, Manuel, Karolina, Enni, Alex, Ajoeb). The highlights presented here are just the ones I have been personally involved with and would be different for everyone person in every branch.

We also wouldn’t be anywhere without our supporters, mentors and partners.We have partnered with many fantastic organisations over the years and this continues to this day. I have also worked closely with Johnson & Johnson Innovation (a founding partner), Immunocore, GJ (a founding partner), Vistra (a founding partner), IMS Health, the super team at UKTI (DIT), Penningtons Manches LLP, the investor relations team at Woodford Investment Management LLP, the EBD group, Biocity, Oxford University and Cambridge University to help bring some of the ideas above to fruition and again appreciate their support. We of course have numerous other sponsors and supporters; however this is just a highlight of my personal experiences.

A Digital-First Approach to Tackling Coronavirus

As technology and medicine become more entwined, it has become clear that at some point — in the near future — digital health will dominate healthcare. What this means specifically will be difficult to define, because digital practices will take innumerable forms. Generally though, it simply means that we will begin to depend more andaaa