Narges Sheikhansari: Thanks for accepting our invitation to this interview. It’s great to have you here today. So, the first question is about your team. What are your backgrounds and what is your founding story?

Isaac Johnson: That’s a really great place to start. I think for us, it all started back, 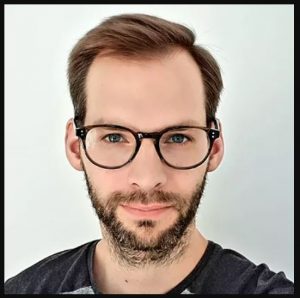 in 2019. So, back then I was a cancer research scientist with Cancer Research UK. I was a post-doctoral researcher there. I was in a lab which was doing preclinical assessments on new cancer therapies. And one of the things that we were doing was testing novel combinations of therapy in mice. What you do that is you use callipers to measure tumours that are growing under the skin of mice, to see whether your therapy has had any effect. I hated using callipers; absolutely hated it, because it was so variable. So, that initiated the idea that there must be a better way of doing this. And then I came up with a concept. Then, I met Mike Irvine in a competition, and we took onboard the comments we received during that process. Together we used our respective networks to find people who we thought might be able to bring this idea to life.

Narges: Interesting. That leads us to the second question, which you’ve kind of answered. What was the missing link in the industry or amazing technology development that motivated you to create your start-up?

Isaac: Absolutely. I think knowing what I know now, one of the absolute best ways to start a business is when you experience a need for yourself.

And the great thing for me is that we’ve been hearing a lot, from talking to different people, “I wish I had this tool when I was doing my research”.

Narges: Very well put. And what have been the key pieces of support that have helped you grow?

Isaac: I think it’s multifactorial. I think a lot of it is serendipitous and a lot of it was actively sought. So, our device uses a certain amount of optical technology and without the kind of support from someone who actually knows what they’re talking about, it wouldn’t have succeeded at all. Some things you can’t predict, some things you can’t see in advance. You just really try and find as many people that you can talk to as possible. Find out where your gaps in your knowledge are. Because there’s no point in bringing people in that already know what you know.

Narges: Good point. Now, have there been any challenges to your success? What are the unexpected lessons you’ve had to learn?

Isaac: You have to stick with the vision. Now, it might be that you need to iterate on that vision, and you know, you should be iterating regularly. But you still need a direction. You still need to know where you want to go, what you think is going to get you there and test those hypotheses. So, the key challenges were how to bring this device to life, and what were the key parameters. And you can think of 101 different options. I think the key thing was sticking with something, generating a robust hypothesis, and a robust means of testing, as well as gathering feedback and thinking about what that result means and bringing that into your ideas. So, the challenge is what the direction should be and allowing yourself to constantly evolve and change but at the same time, maintaining a clear direction. That’s a hard balance to achieve, because often one suffers at the expense of the other.

Narges: That’s very true. And having overcome such challenges, what are your next steps? Where do you see your start-up in 5 years?

Isaac: Well, I hope that in 5 years’ time , we will have released the product, that the product is performing well, and it’s making difference to cancer researchers not just in UK but globally as far as we can. However, I think the idea for us has always been that this is going to be something which will have a human application, and we have a few ideas about what that is already. But I think the key change I’ve seen in our mentality over the last couple of months is in thinking that we’re not just a preclinical oncology company. We are a medical device company and that’s where we want to end up. That’s what we want to be. We want to be at least testing the device and our ideas and other technology for direct human application. And if we get there in 5 years, I’ll be ecstatic.

Narges: That’s an interesting vision. I hope you succeed. My final question is do you have any advice for other scientist entrepreneurs looking to start-up their own innovation?

Isaac: Yes. I think looking back at my experience, the number one feasible piece of advice that I have is, if you’re thinking that entrepreneurism might be interesting, even if you don’t have an idea or anything concrete, especially with the university structure, there’s so much opportunity out there to learn more and to learn from others.

And so, I think as early as you can, start going to events, talk to different people, get involved, because it may be that you have that “aha” light bulb moment

one, two, three years down the line. But you’ve been involved enough, you’ve learned from your peers and everyone else around them. When you do have that moment you know what to do with it. And you know what your next steps are. I think even if you’re not an academic, and you just have an idea, there’s so much groundwork that can be put in, that really helps. Even if things don’t work out, the learning journey that I’ve made so far is huge. And obviously there are financial and personal implications as well which can’t be ignored, because your own personal health and mental health are key to overcoming the challenges especially early on, so you have to be in the right mindset. There are sacrifices you have to make. Using what you can to set up that groundwork would be the best chance you have of coping with those challenges. However, I’m also thinking, whatever you do learn from this process is going to be a valuable
asset if entrepreneurism and businesses are what you are looking for in the future. So, whether it’s asset management, joining funds, or joining commercialization groups, there’s so much that this time will teach you and that should not be ignored. So, if you have the means to do it, personally and financially, think about the benefits that you’ll have, even if things don’t work out.

Narges: Wonderful. Thank you so much Isaac.